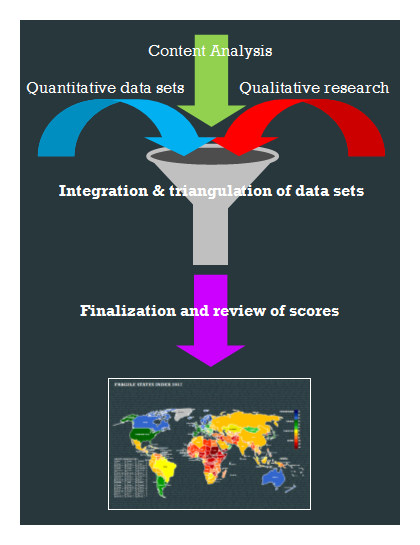 In a highly interconnected world, pressures on one fragile state can have serious repercussions not only for that state and its people, but also for its neighbors and other states halfway across the globe. Since the end of the Cold War, a number of states have erupted into mass violence stemming from internal conflict. Some of these crises emerge from ethnic tensions; some are civil wars; others take on the form of revolutions; and many result in complex humanitarian emergencies.

Fault lines can emerge between identity groups, defined by language, religion, race, ethnicity, nationality, class, caste, clan or area of origin. Tensions can deteriorate into conflict through a variety of circumstances, such as competition over resources, predatory or fractured leadership, corruption, or unresolved group grievances. The reasons for state fragility are complex but not unpredictable. It is critically important that the international community understand and closely monitor the conditions that contribute to fragility — and be prepared to take the necessary actions to deal with the underlying issues or otherwise mitigate the negative effects.

To have meaningful early warning, and effective policy responses, assessments must go beyond specialized area knowledge, narrative case studies and anecdotal evidence to identify and grasp broad social trends. A mixed approach integrating qualitative and quantitative data sources is needed to establish patterns and trends. With the right data and analysis it is possible to identify problems that may be simmering below the surface. Decision makers need access to this kind of information to implement effective policies.

The Fragile States Index (FSI) produced by The Fund for Peace (FFP), is a critical tool in highlighting not only the normal pressures that all states experience, but also in identifying when those pressures are outweighing a states’ capacity to manage those pressures. By highlighting pertinent vulnerabilities which contribute to the risk of state fragility, the Index — and the social science framework and the data analysis tools upon which it is built — makes political risk assessment and early warning of conflict accessible to policy-makers and the public at large.

The strength of the FSI is its ability to distill millions of pieces of information into a form that is relevant as well as easily digestible and informative. Daily, FFP collects thousands of reports and information from around the world, detailing the existing social, economic and political pressures faced by each of the 178 countries that we analyze.

ORIGINS OF THE FRAGILE STATES INDEX: THE CAST FRAMEWORK

The genesis of most indices is to begin with a concept of what needs to be measured, followed by the development of a methodology that hopes to perform that measurement. The FSI followed a very different trajectory, whereby the idea for the Index occurred subsequently to the development of its own methodology.

FSI traces its origins to the creation of FFP’s Conflict Assessment System Tool (CAST), that was developed in the 1990s as a framework for policymakers and field practitioners to be able to better understand and measure conflict drivers and dynamics in complex environments. The CAST framework has been widely peer reviewed, and the continued usage of the framework by many of those same professionals, as well as now by local civil society and community groups in conflict-affected areas, is testament to the framework’s enduring relevance. In 2004, the CAST framework was used as the basis for the FSI, as researchers wished to determine whether state fragility could be assessed and ranked at a national level using the existing framework.

Though at the ground level, the CAST framework is applied using various practices such as individual incident reporting and observation by field monitors, the sheer volume of data to be analyzed at an international level required a different approach. To that end, technology was employed to enable researchers to process large volumes of data to perform the national level assessments that feed in to the FSI.

These three data streams are then triangulated, applying a set of rules to ensure the data sets are integrated in a way that leverages the strengths of the different approaches. This approach also helps to ensure that inherent weaknesses, gaps, or biases in one source is checked by the others. Though the basic data underpinning of the Index is already freely and widely available electronically, the strength of the analysis is in the methodological rigor and the systematic integration of a wide range of data sources. Final indicator scores for each country are then produced based on from this process. A panel review is then conducted by the research team of the final index to ensure all scores are proportionate across the country spectrum.

The final FSI Index product is intended as an entry point into deeper interpretive analysis for the user – in line with the CAST framework approach. Though an index inherently ranks different countries – making some more fragile than others – ultimately the goal of the FSI is to measure trends in pressures within each individual state. By identifying the most salient pressures within a country, it creates the opportunity for deeper analysis and planning by policy makers and practitioners alike to strengthen each state’s resiliency. To that end, the following section outlines what each indicator seeks to measure in the Index – as well as providing guiding questions for deeper levels of analysis and inquiry by the user.