Libya Continues Path as the Decade’s Most Worsened Country

Despite a surge of hope in January 2019, when a meeting in Berlin brought the main warring factions together with international stakeholders in an ultimately unsuccessful attempt to secure a ceasefire, chaos continued to reign for most of the year. With an estimated 300,000 Libyans displaced1 since the ouster of Muamar Gaddafi in 2011, and thousands killed and injured by indiscriminate attacks on civilian population centers, Libya remained one of the world’s most dangerous conflicts in 2019. And as the year closed, hopes for peace remained as elusive as ever.

The war in Libya is one of overlapping conflicts fueled by multiple, often competing, internal and external interests. The two main warring parties are the internationally recognized and Tripoli-based Government of National Accord (GNA) and the Interim Government, which operates out of the east of the country and is supported by the Libyan House of Representatives (HOR) and the Libyan National Army (LNA) led by Field Marshal Khalifa Haftar. According to a UN report released in December, other parties to the conflict include various internally and externally-supported militias based in Sudan and Chad, fighters from ISIL splinter groups, as well as shadowy paramilitary actors, such as the allegedly Moscow-backed Wagner Group. In addition to these actors, in 2019, foreign powers such as Turkey, the United Arab Emirates, Jordan, and Russia have also taken sides, throwing their political weight behind and sending support in the form of military and financial aid, to various militia groups. Late in the year, reports began circulating that Turkey was sending battle-hardened fighters from Syria to Libya in an attempt to dislodge Haftar, adding yet another deadly dynamic to the conflict.

Libya’s ongoing conflict has been enabled and compounded by long standing structural and institutional weaknesses. As Syria and previously Iraq have demonstrated, extreme factionalization and group-based grievances allowed to fester and become malignant under authoritarian leadership often portends the type of humanitarian disaster unfolding in Libya. For decades under Gaddafi, dissent was treated as treason and tribal and group-based allegiances were prized above bureaucratic competency or functionality. With oil revenues helping to keep the regime in power for decades along with selective and ever-shifting internal and external alliances, the true nature of Libya’s internal fragility and systemic brittleness was often disguised. With the 2011, so-called “Arab Spring” uprising, and the NATO-backed ouster of Gaddafi, Libya’s house of cards began to fall. Unlike some of its north African neighbors, however, the revolutionary unity that brought people together at the start of the uprising quickly dissolved, despite the internationally supported government in Tripoli and millions of dollars in foreign investment.

These systemic weaknesses have also served to both exacerbate the conflict and slow efforts towards peace. In a general environment of chaos, absent a functioning government or the rule of law, indiscriminate killing of civilians and impunity for those who commit war crimes prevails. This was tragically highlighted in April when Haftar’s forces launched an ultimately unsuccessful attack to take Tripoli, hitting private homes, hospitals, and other civilian centers. The offensive, which lasted for most of the year, killed nearly 300 civilians and 2,000 combatants, and displaced an estimated 140,000, according to the UN. Further, as highlighted in reports by the International Crisis Group and the UN in 2019, the war in Libya has become one of both maximalist positions and cyclical retribution, with civilians invariably caught in the crossfire.

Beyond the civil war that has raged in Libya for the better part of a decade, the country is also the main transit point for sub-Saharan African migrants seeking a better life in Europe. The plight of these migrants, who are often fleeing war themselves, has been brought to the fore in recent years through images broadcast of their horrible mistreatment and deaths at the hands of various groups, from pro-government forces to rival militias and ISIL-affiliated terrorist groups. According to a special report by PBS Newshour in late 2018, the profits from the trafficking of these migrants and other vulnerable populations often go directly to ISIL-affiliated terror groups who work in cooperation with human traffickers. As in other war zones and areas which lack any real government oversight, profit is the common ground where the interests of human traffickers and terrorists converge, at the very real cost of human lives and immense suffering.

While securing a ceasefire remains key to bringing an end to Libya’s near constant cycle of conflict escalation and resultant misery, without a concurrent focus on addressing the deep structural weaknesses of the Libyan state, it is unlikely true peace will ever take hold. And with so many competing external and internal interests, which seem to be compounding and growing daily, it appears that chaos will continue to reign in Libya for the foreseeable future. 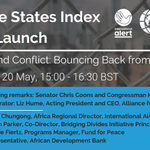 The Fund for Peace@fundforpeace·
14 May 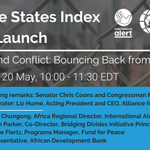